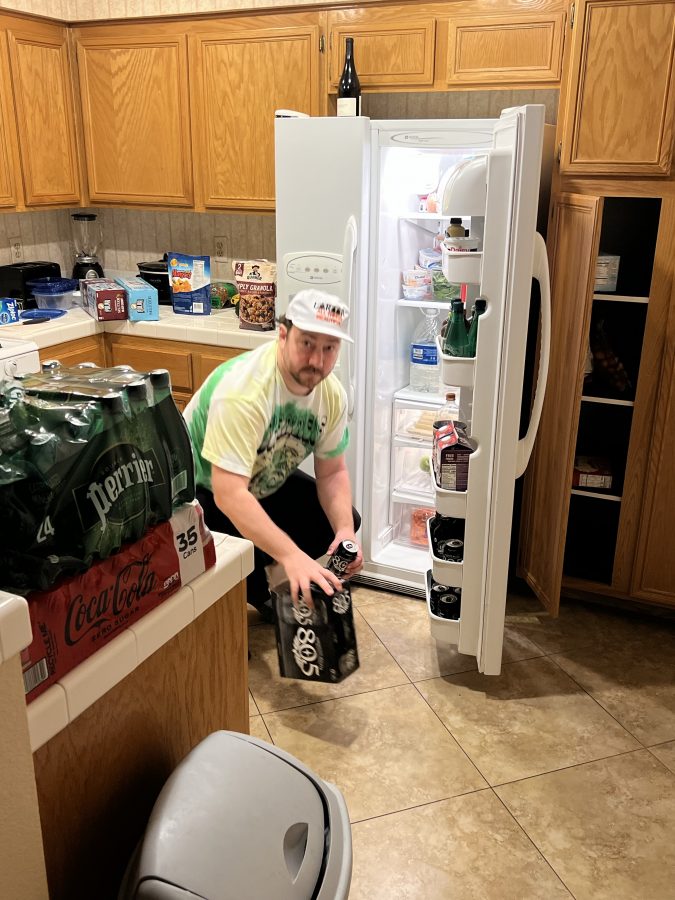 My initial plan for the 2022 World Series of Poker was to keep notes on every tournament I played so I’d have something to reference if I wanted to write, but I stopped doing that after a few events and decided to rely on my shoddy memory so I’m not even more distracted than I already usually am while I’m playing.

I did post about the Dealer’s Choice event already so my next event was the $500 Housewarming No Limit Hold’em tournament with a $5 million guaranteed prize pool the next day. I think this shit show event had four starting days and you could re-enter once for each flight. I never planned to play it, but it seemed like a bad idea to skip a small buy-in bracelet event that all the ding dongs of the poker world flew out to take a once in a lifetime opportunity shot at. So I sat down in one of the flights seven levels deep with about 40 bigs.

I had to talk myself out of punting on the very first hand I decided to play. With blinds at 600/1200/1200 it folded around to me in the small blind and I made it 3000 with AJ and an older white man in the big blind made it 11k and we had about 40k effective total. I certainly don’t have enough chips to flat and play flops here and my hand seems to good to fold in a blind vs blind situation but I looked this guy over and decided that he wasn’t the type to risk it all here unless he had something he was going with. And then I still considered jamming it because I could just re-enter if I busted out. I ultimately talked myself out of it because $500 is $500 and I didn’t want to wait in any lines.

My first big chip up happened in Level 8 with blinds at 1k/1500/1500. Someone opened in early position to 3K and I 3-bet QQ to 10k. He snap called and then donked 25k on the 765 rainbow flop. He only had like 30k behind so I put him all in and he snap called again with what I assumed was 99-JJ… but was actually 73 of clubs. Somehow that hand didn’t fuck me and I won a massive pot.

Another bizarre hand happened in Level 8 when I opened to 3500 with JTo and only the big blind defended. The flop came T83 rainbow and I bet 4500 and he check-raised to 13k. I wasn’t too surprised by this because he looked like someone that wasn’t going to let anyone push them around, so I’m not surprised to get attacked here when I’m opening so many hands. I don’t think his raise makes much sense though. Maybe he check-raises some better tens, but I feel like his value range here is mega small and folding would be insane. I call. The turn is a Jack and the draw I’m most concerned about (because I’m blocking J9) comes in. He leads out 25k and since he only has 40k behind and I don’t have any plans of folding here and I don’t want to have to make any tough choices on the river, I just stuff it in his face. He snap folds and I have 180k (almost 4x starting stack) on my first break of the day.

That break was supposed to be 20 minutes and somehow turned into a whopping 70 minute break. I guess a dealer brought it every stack at his table for the color and no one knew how many chips they had and the WSOP staff was trying to call all the players back to this one table with 3000 people standing around talking. It was total madness.

I lost a chunk of chips when I opened again with the JTo and got the Q96 flop. I whiffed and lost about 30k overall. I did a bunch of whiffing after that and found myself down to 85k when I got AK in vs KK preflop and spiked an ace. I won another all in vs a short stack with JJ shortly afterwards and got back up to 173k.

My toughest spot of the tournament happened at 2k/4k/4k when I opened under the gun with TT and the next player made it 30k. I started with like 140k effective and this feels like a rough spot to get it all in. Maybe I should just fold since set-mining seems spewy at this stack depth? Or is my hand too good? I dunno. I decided to call and then check-folded on an AKx flop. I imagine I’m busting out here almost all of the time if I decided to go with it preflop.

I got down to about 14-17 bigs and was mostly open-jamming or reshoving preflop until I picked up KK and decided to make a standard open. The big blind defended and we saw the AQT flop. I checked this one back even though it highly favors my range. It’s also a board texture where my hand doesn’t mind giving free cards since I’m already beat or very few cards will beat me. The turn paired the ace and here’s where I should have comfortably fired a bet out. It would be pretty rare for someone to check the best hand to me twice and even though my hand is hard to outdraw, I should try to get some value from it here. But I checked it back like a dope and the river paired the queen and my opponent was suddenly interested with a 30k bet. I obviously didn’t check it this far to consider a fold now, so I called and he showed me Q9o and I was down to less than ten bigs. This is a Dark Knight special: give free cards to hands that have 2-4 outs and lose critical pots to them.

I managed to ride this sub-10bb stack to a cash but got my last six bigs in with AJo and got picked off by the big blind’s 97o only to see an 877 board that basically flopped me dead.

That got me on the board with my first cash of the 2022 WSOP, albeit a very minor one.

Next up was the $1500 limit Omaha 8 or Better event. I sat down at the end of level two for this one and immediately hopped into Ari Engel’s $300 last longer bet. When I handed him the money he asked if that meant he’ll make the blog. You gotta love when one of the best poker players in the world is aware of what you’re doing and seems to be a fan of your work. My starting table had Tom Schneider – a 4x bracelet winner – but no one else that I recognized.

I floated around 20k and 26k for roughly eight levels before going on a rush of big hands in level 10 that didn’t produce any winners and cost me almost all of my chips. It was during this level that Poker Hall of Famer Eli Elezra was seated at my table and when we both were down to around 6k in chips, I asked him if he wanted to do a $20 last longer. He wasn’t interested in that, but he perked up and we started talking about diabetes and he eventually offered that if one of us won the whole tournament, we’d owe the other one $5000. Pretty unlikely that would happen, but I thought it was a cool story and then he busted out and then I busted like two minutes later.

I decided to fire another bullet at the $500 NL Housewarming the next day and I showed up just as late as I did on my previous entry, but it was the weekend now and this is the line I had to wait in for a seat card AFTER printing my registration ticket. Or not. WordPress won’t even let me upload the video clip because it’s too long…but it looked like it was going to be well over an hour just go get seated.

I wasn’t about to do all that and someone in the WSOP payout area assured me that if I never sat down, they would refund my Bravo account. I wasn’t sure about all that, but I saw WSOP big man Jack Effel walking around later that day and he took my name down and I had a $500 refund by the end of the night.

I ended up playing the $1500 Seven Card Stud tourney and I floated just above starting stack through six levels before getting absolutely trashed during the next three levels. I lost with KK-3, AA-x, and Kx-K during that stretch and found myself down to 5800 coming back to 1000/2000 betting limits and was out shortly after that when I decided to go with a QJT that ran into AA-7. My board ran out super sweaty – QT-JJQ9-9 – but he paired his 7 and his aces up ousted me from the tournament.

I played an unscheduled event at South Point the next day, a $240 ROSE tournament. I ran up a stack early and felt like I was quite easily the table captain, but the wheels fell off and I ended up busting pretty far from the money.

That left me with three $1500 bricks and one min-cash in my smallest WSOP event after my first five days in Vegas. Not the start I was looking for. That’s all I’m going to write for this post as I’m way behind now. Next up, The Joker cometh: