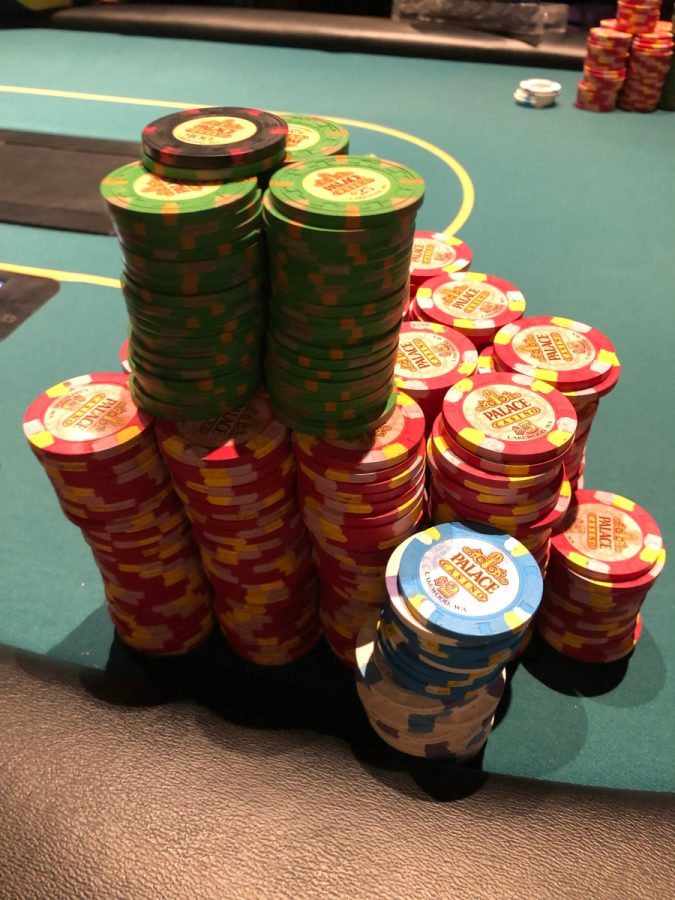 It’s been about three months since my last poker results post and something really notable has happened: I’ve completely transitioned from limit Hold’em to no limit Hold’em cash games. In my first update this year, about 39% of my live hours were in 1/3 NL games but over the past three months, almost 90% of my live cash game hours have been in no limit cash games. Technically, they are 3-300 or 5-300 spread games, but for simplicity I will always and forever refer to them as no limit games. To me, it’s only important to differentiate between the two types of limit when the spread is relatively small (i.e. 2-20) – especially when compared to the maximum buy in. Even when the effective stacks are $500, a 1/3 game will almost always play like a no limit game (except in preflop 4-bet situations).

Truth be told, I haven’t played a real limit Hold’em session in the last three months. My longest LHE session is less than 3.5 hours and I’m always playing at least 8 hours when I show up for work. I have played a couple of slightly longer 5/10 mix sessions in a home game, but overall, limit cash games have accounted for about 10% of my overall volume this past summer. It’s a stupid small sample, but I did run at 2.57 big bets per hour in these games.

I’ve played 275 hours of no limit cash games since my last blog post and as surreal as my results seemed at that time, they haven’t slowed down much over the last three months. I was at 24 big blinds per hour in 1/3 in my first three months this year and over the last three months I’ve played more than double the hours and my hourly has only dipped to 16.67 big blinds per hour over that span. I still feel like that’s really good but also much more realistic. Overall this year, I’m making $58/hour playing 1/3 NL and that is just utterly insane to me. I’m still convinced something in the $30-$40 range is an hourly I should be happy with at these stakes and I wouldn’t be surprised to regress to that mean as the games get more reg heavy and a lot of the weak players go broke, go back to limit Hold’em, or *GASP* get better at the game.

I have experienced some rather crazy winning streaks since switching to mostly big bet cash games. From June 13th to July 7th, I rattled off ten straight winning cash game days (I was in Vegas playing tournaments during that stretch also). After a single losing session, I put together another six session winning streak, giving me one losing day in a 17 session stretch. I’d be willing to bet I’ve never done that in my limit career. The sick thing about this win streak is that I started off down $300-$500 in more than half of those sessions.

After having what I was hoping was a breakthrough 3/5 session (+$1405) on July 28th, I followed that up by immediately erasing that progress with my second worst loss (-$1727) of the year on my birthday (July 30th). I didn’t take another stab at 3/5 for three weeks. In fact, I was so demoralized after rage quitting a poker session on my born day that when I got home I just sat in my car in the driveway for an hour and a half before going inside. This probably seems like an overreaction considering July was still my best month of the year, but a) it never feels good to have a huge losing session; b) my accumulated tilt at the 3/5 level is a real thing; c) how am I gonna book a massive loss on my birthday?! and d) any time I quit a session early because my emotions are so out of control that I can’t think straight I just feel like a massive failure. Granted, while it’s a good thing to have the discipline to eject myself from the casino when I have a malfunctioning mind, it’s also rather embarrassing and feels like something that should never happen to me at this stage of my career – especially at the stakes I normally.

Fortunately, I rebounded from that low point by going on a massive rush to start August. I booked seven straight winning days to start the month, including a mind-boggling streak of five consecutive wins of $1000 or more at the at the 1/3 level. As absurd as that is, it gets crazier. On August 6th, I won $1600 for my best 1/3 session of all-time. In my next session, I set a new record of +$2076. And in my next session? Another new record: +$2155. What. Prior to August 6th, I had played 84 sessions of 1/3 in my life and I’d never won $1600+ in any of them and then I did it in three straight. Crazy.

After the first two weeks of August, I was up almost $8.5k and thought I had a chance to challenge my best cash game performance in a single month, but I inexplicably played only six sessions over the final 18 days of the month and the results were pretty breakeven.

Volume has still been a bit of an issue for me. I have been playing softball on Monday nights in Bremerton, so a day that I usually spend entirely with my wife is being cut in half and, because of that, I haven’t been pushing to play poker on Saturdays or Sundays. This adjustment has resulted in me mostly playing only three days a week. I try to play 10+ hours most days though, so even though I’ve been taking four days off a week, I’m still able to get 75-80% of my desired hours in at the tables. I usually spend Thursdays studying while Dina is at work and then we have quality time together when she gets home, so when I include those study hours in my overall work hours, I can live with the somewhat lackluster volume I put in. I only have three games of softball left so when that’s over, we will have two and a half days for quality time life balance and I can go back to playing four days and 40+ hours a week, hopefully with little pushback.

After my three week hiatus from stabbing at 3/5, I have jumped back in the pool over the last few weeks, with 5 of my last 8 sessions spent mostly in 3/5 games. After going +$578, -$692, -$734, +$918 over the first four of those sessions, I finally had my coming out party at the 3/5 level with a monster +$3240 session. My volume at this level is still so small that a single massive win was enough to change me from a lifetime loser to a lifetime winner at 3/5 NL. Hopefully I will never be in the red in this game again. More importantly, with the majority of my sessions over the past few weeks coming at the 3/5 level, I miiiiiiight be establishing that as my regular game going forward. I did pass on 3/5 last time I played (and it was a juicy game) because I was already down multiple buy-ins at 1/3 and then I ended up almost setting a record 1/3 loss instead. My decisions will still be mostly lineup dependent and I’m not ashamed to drop down in limits if the 1/3 games look better.

Interestingly enough, even though I have been playing primarily no limit cash games this year, I still find myself gravitating towards mix game tournaments as I outline my schedule for the World Series of Poker next month. I just prefer playing mix games and I still do. If Palace had a regular red chip mix game, I wouldn’t even be playing no limit. The good news is, if I do decide to play some NL events (and I’m almost certainly playing the Main Event), my NL game is as good as it has ever been right now.

Here’s the first draft of my WSOP schedule outline: