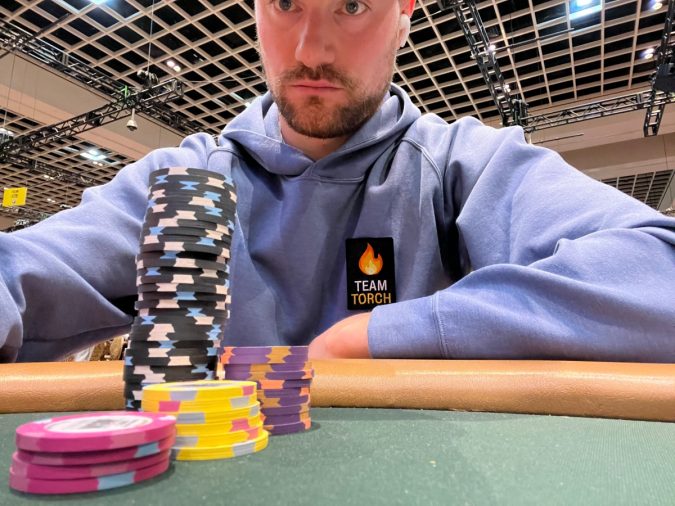 My first event of the summer was the $1500 Dealer’s Choice at the World Series of Poker – an event I’ve always wanted to play and have always skipped. There are games in the mix that I’m definitely not adept at (Pot limit 2-7 Triple Draw, 5 Card Draw) so I’ve been skeptical about this event in the past, but I decided to go for it this time.

My first notable hand was in Stud Hi-Lo with no qualifier – a game I never play and my table picked over and over all day. I can’t blame them. From what I saw, there were multiple players that were absolutely awful at it, including one that kept picking it – a known pro whose name I won’t put on blast because, uh, it might get back to him. Someone opens and I have 97-5 – a hand that would be unplayable in Stud 8, but has way more potential in this variant. We end up going 3-ways and my board runs out 97-5468-J. I took the betting lead on 5th street and I was so shocked when I got raised on 7th that I started to announce “9 hig-“ before realizing what happened. Both my opponents had Badugi upcards so neither of them could have a flush. There was one bigger straight available but it would be impossible for them to have and neither of them had a pair on board. I had the nut high and it seemed likely my low was probably no good, but I still had an easy 3-bet and they both called it and somehow neither of them could beat my low either and I scooped a very nice pot.

This had me up to 31.5k after three levels and on the first break.

I was down to 22.3k after six levels on the second break.

I played a weird Badugi hand against Rick Fuller – a pretty well known pro from the Washington area. With blinds at 300/600, I open with 842x and Rick 3-bet from the big blind. I called, he stood pat, and I drew one. I reduced my tri to a 542 and called another bet. I made a Q542 Badugi after the second draw and decided to raise it. I’m honestly not sure about this play. My thought was he might break or fold a better Badugi and I also thought it was pretty reasonable that I actually made the best hand, but patting and calling leaves me pretty clueless about my hand strength, even if he checks the river. Like, if I call and pat here, he’s probably not going to bet a ten high Badugi. So I raised it up and he ended up calling and standing pat. I tanked for quite a while thinking about if I should break or not and ultimately decided he wouldn’t call and pat with worse and I had a really good draw. I drew one, bricked, checked behind, and rolled my eyes when he turned over a QJxx Badugi. I mean… I’m obviously capable of raising as a bluff after the second draw… and the pot is large… but damn.

During the same round, I had 652x in the big blind and it was raised and 3-bet to me. I’m actually not sure about this spot either, but the 3-bettor is super loose so I decided to go with it. The opener 4-bet and we went draw one, pat, draw one. I caught a suited ten and it was one bet after the draw. The second draw was the same and I caught an off suit 3 to make a premium Badugi. I got in a check-raise and calls from both players and then paid off by one of them after the last draw.

Back to Stud Hi-Lo no qualifier and another strange spot. I have 65-7279 in a 3-way pot against xx-6TT3 and xx-8643. The 86 led out and I decided to raise it in an effort to get the tens to fold and improve my chances of winning the high. He didn’t cooperate and then the 86 made it 3-bets and we both called. I paired my 9 on the river but when the tens called two bets cold on 6th, I figured he had tens up and wasn’t folding, so when the 86 bet 7th, I mucked, the tens called and the bettor just had a low and the tens just had… tens. I got fancy trying to get the pot heads up and then I folded half of a very large pot when it didn’t work and I improved on 7th. Seems bad.

I won a nice scooper in Stud H/L no qualifier with a 7h3x-3h that ended up making an 8 low and a flush.

I ended this level with a hand of Pot Limit Omaha 8 or better by limping along on the button with QTT8 double suited. I flopped a set of tens on KT3 and ended up overcalling pot-sized bets on the flop and 5x turn from a solid player in the big blind and then checked back on a 7x river and my hand ended up scooping somehow. The big blind flashed K3. I was peaking after this pot with 38.3K after eight levels.

I came back from break with my blood sugar plummeting and played a super fuzzy Badeucy hand against Rick Fuller. I opened and he called from the big blind and then drew one, which seems like a hand he should probably be 3-betting, and then he stood pat after leading into me. This made me think he had a pretty weak hand both ways so I chased him down and made a 9 low and an 8 badugi and he showed me a 7 low with a 6 badugi and I actually had to stand up and look at his hand because I couldn’t believe it and my blood sugar was low enough that I thought I might actually be seeing things.

I was very card dead for these three rounds but did play a couple of No Limit 2-7 Single Draw pots that I wrote notes for.

The first was with blinds at 400/800 with a 1200 big blind ante and I had 97762 in the big blind. It folded to the small blind and he made it 3K. We had like 18k effective and I’m guessing I should just be shoving it here with a premium draw one and probably lots of fold equity… but I honestly don’t know what I’m doing. I called. He drew three and said I was supposed fold. Sigh. I draw one and pair my 6. He checks, I bet 4000 because wtf and he shows me a pair of 5s and folds. Disaster avoided.

The second hand I opened to 2400 with a pat 98642 and the button and a blind called. They both drew one and I think I have a hand strong enough to value bet here, but I also think I don’t have very many bluffs here when I bet so I felt like putting a good hand in my checking range made some sense. It checked to the button and he made a rather small bet and showed 987xx and I won the pot.

I had 32k after twelve levels.

In level 13, I was down to 22k and played an all in Big O pot with Jeremy Harkin a.k.a. Worm, a well-known Big O specialist and bracelet winner from Oregon. We both had aces and my AAJ94 made a better low than his AAJ5x and I got three quarters of the pot.

After two ice cold levels, someone picked Limit Omaha Hi for the first time all day. I defended 6544 with a suit against a cutoff raise from Worm and then whiffed my check-raise on T64 rainbow. The turn was a Kh opening up a back door flush draw, I bet and Jeremy called. The river was the 8h and I check-called and lost the nut flush. I think Jeremy is capable of bluffing the naked ace of hearts here, but he has all the flushes too. I think this is just a check-fold and save a big bet spot.

I was very short now and 3-bet the QJJ9 with a suit in the same game and one of the blinds woke up with AAKx and we got my five blinds in preflop and I failed to outdraw his aces and I busted with 30 minutes left in Day 1 for nearly maximum torture.